As we celebrate Veterans Day I salute everyone of you that have put the uniform on, along with me, to support the constitution against all enemies, FOREIGN and DOMESTIC. Some may have done it for a year or so, some like me that did it for a career, it doesn't matter, you all are the one's who stood up, raised your right hand and said that oath of enlistment or commission. Thank you for your service!!!! 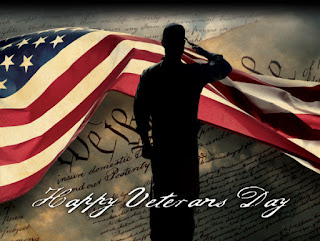 Well my Veterans Day went well. I slept in a bit since I had the day off, JUGM and I went out for a day by ourselves since the kids had school, yeah I know. Well we headed to the IHOP in Pineville NC to have some breakfast as they were honoring veterans with a free 3 stack of pancakes. Well let's just say with the wait time and the numerous tables that still had a previous patron's dirty dishes on them and with no expedience to clean them off, I told the hostess to scratch my name off the wait list and we left. There is a reason why I don't eat there much. So we continued on with our plans and headed over to Cabelas for a few items.  While there I saw that former group member that I posted about before, "the matriarch" there on his lunch break as it was just after 11:30. I pointed him out to JUGM and all we did was laugh and went on about our business. After our business there was done we headed home because I wanted to surprise the kids with picking them up from school as I don't get the chance with my work schedule. Well that was my day, pretty uneventful.
As I watch T.V. I cant help myself from not laughing at all these spoiled little liberals who are so upset that Trump won. I have seen the Miley Cyrus video several times today and what do you say, I mean really, I don't know what to say right now. Really???? I cant even find it in myself to post that sorry video on my blog. Well, time to go, the Boys and I will be in the blind early in the morning and it should be interesting with a 10 and 11 year old being quiet. Stay safe and carry often!!!!!

It's amazing what can happen in 24 hours when the voters speak. To all the celebreties who said they would leave.....

The election is over, Donald J Trump won the presidential election and will take office on January 20th, 2017. I must say I am surprised that an everyday citizen of this country and who has never ran for any office can win over the hearts and minds of a pissed-off society that is lashing back at liberal ideology and by-god, he did it. I was worried last night, but texting back and forth to Florida, once Florida fell to him, I had a feeling it was going to be a good night. As I type this post out, I am hearing a story on TV about the polling and all I can do is laugh because the pundit's "F"'d it all up again. President Elect Trump, I wish you much success in your effort to make this country great again. I look forward to seeing your picture hanging on the wall at work. 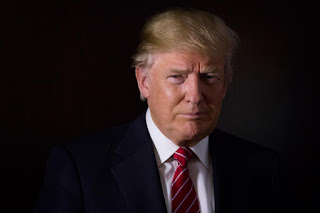 So in my post election coverage, I am pleased to know that a majority of the world leaders have embraced the transition of power that will take place in 70 days or so. It's almost like you can feel the relief from the rest of the world that it is not the other candidate and President Obama's days are nothing but a dwindling light fading away and soon too be extinguished. THANK GOD!!!

As I prowled around the web today I was reminded of the liberal celebrities that said they would leave the country if he was to win as posted on "The Hill.com". Well let me chime in on them:

Bryan Cranston: Breaking bad star, who I still don't know who the hell this guy is nor do I care.

Samuel L. Jackson: Big-Time liberal actor who has done nothing for the Black community and lines his pockets from films and Capital One credit card commercials. I'm sure you will get some points on your Capital One card as you leave for South Africa.

CHER: She said she would go to Jupiter if he won. Better call Space-ex because Obama dissolved all space travel through NASA.

BYE!!!!
Don't let the Ozone layer hit you where the good lord split you.

Barbara Streisand: Can we get a country to take her please? Philippines? North Korea? Indonesia?

Amy Schumer: This is better than any joke you have ever told. How's that Bud Light commercial working out for you, oh that's right, you were let go.....

Whoopi Goldberg: As you said earlier this year that if Trump won you have the money to move. Better call 2 Men and a Truck. 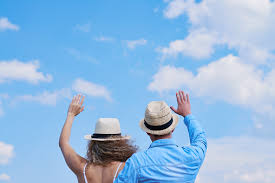 I don't how many of you have seen on the news tonight but it seems there are many people who are not happy with the outcome of the election and are protesting in several major cities in the US. Well first off if you would have had a "Civics's" course in your school years you would know that the presidential election is decided based off the Electoral College and not off the popular vote. Thank your liberal school systems for making you look stupid. It's obvious that you are the product of the Nanny-system of liberalism for sucking on a nipple your whole life and now it seems that maybe you will have to get a job and support yourself. Hey, Grow Up and do something with your life.

I feel this election has shined a very large life on Liberalism and the globalist movement we have seen for many years. I honestly feel that with BREXIT and now this historic election, globalism is on the verge of collapse. Pay close attention to Europe and the EU. I would not be surprised that they will fade away soon like our 44th president.

Finally, things have slowed down for the winter. We had another anniversary and Election Eve, what will tomorrow bring us........

Things have slowed down drastically here. Football is over for the boys and I am thankful. I wont miss the two separate practices in two different locations and games on the same field with sometimes hours in between. I am so ready for baseball when they are on the same team. As a reward for the boys outstanding academic achievements and football with one winning the county championship in his age group and other finishing as runner up in his, we thought it would be a good time to reward them with an adrenaline laced jaunt to Carowinds. For everyone now has no clue what Carowinds is, it is a amusement park situated on the NC/SC state line, just off I-77. Well I must say that it has changed much over the 30 yrs since the last time I was there as a teenager and the only ride that is still there from my younger years is the Carolina Cyclone which I remember was the newest coaster in the park. Well at 45 years young, my body sure as hell did not feel young after riding all the coaster and having my body go in directions it hasn't for many years. What coaster did we not ride, we rode them all.
As the kids and I road up Fury 325's hill, all I could do was wonder, WTF!!! am I doing on this thing. I know why, it's for my kid's. So I had ND next to me and NW was on the end. All I could tell ND was just close your eyes and don't get sick. What made things worse, they wanted to ride in the rear car. Every coaster we rode, it was the rear car all the time. The rear car's on roller coaster are usually the fastest so as I look up and see the front cars go over, I said in my mind "Oh shit" and all of a sudden we speed up, over the top we go free falling easily 300+ feet to the bottom and them I hear this come from ND, "I HAVE FINALLY LIVED!!!!!" screaming his head off in enjoyment. Let me tell you, this coaster hauls ass in excess of 100 m.p.h. Well worth it if you are a adrenaline junkie. Here is a clip of the ride as we left the park around 1700.


The garden is going with late Summer/Fall crops which of course include collards, broccoli, cabbage, green beans and a second helping of tomatoes. I have half of the garden shut down so this past weekend, the boys wanted me to carve out a RC car track for them. Didn't take to long to construct . Sorry I don't have a picture but hey, the kids love it.

As we close on the eve of election day in this country, I have no clue who is going to win. Who do I want to win, Trump. As I have said, I didn't vote for him in the Republican primary, but am supporting him through the general election as the Republican candidate. Who else and I going to vote for, sure as hell wont be Hillary Clinton. IMHO, I think anyone who votes for her should put there head behind a Jackass and have them kick you square between the eyes for being that damn stupid and an "India, Delta, 10, Tango". I mean really, look at all the crap she has done, with Benghazi, emails, Foundation conflicts of interest, manipulating her own political party, mishandling classified material (oh don't get me started on this subject), Iran Nuke deal, and her dead weight pedophile husband Bill. Even better, let's say that Congress has a "F"ing spine and actually goes through with impeachment proceedings on her, we are stuck with Tim "The Uni-brow" Kaine. You got to be kidding me.

This past weekend, JUGM and I celebrated our 22nd wedding anniversary. As we decided to sleep until we got up, well that didn't happen. We were woke up by the boys and they did this for us. All by themselves. 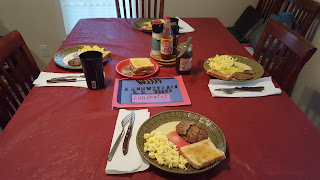 Well that's all I have for now. Say a prayer, this country needs it....