Seem's Wednesday is a good day for me to post, Lack of Situational Awareness, and the Charlotte chaos

Well the kids wanted to play football this fall and we are one pre-season game away from the start of the regular season. The boys are enjoying this new sport to learn and they seem to like it. We shall see at the end of the season if they have a desire to play again, I think they will. The boys are on separate team separated by their age, but next year they will be on the same team. JUGM and I are having to attend each practice with only days off for all of us is Wednesday and Sunday's. This past Friday, the high school team invited the two rec league teams over to run on the field with them which was cool as they let the kids run out and break the banner.

This past Saturday after the kids "Jamboree" for football, where they had their team pictures, weigh-in's, and scrimmage game we headed to Rock Hill to the Dicks sporting goods. I wanted to get better pads for the kids as I find the ones provided by the rec-league sub-standard and kind of cheap. JUGM and I have a system to maintain our situational awareness when we are driving and the angles of vision that we scan. So as we pull in to the shopping center she spots the "Matriarch" of the group I was formally in here in SC, standing on the sidewalk in front of the Dick's sporting goods, waiting on his wife to come out of Michael's craft store with a plastic rifle case in his hand looking totally clueless. So as we pass him by in the vehicle less than 8 feet away I could not contain myself and started laughing.
So we pull into a parking spot and all of us get out. JUGM and I position the kids on our weak side and as he meets up with his wife, we walk right into the store, less than 40 feet from them and go unnoticed. See, now you see why I have formed my own group with military members.... Enough said..... Folks, I am not making this shit up. I didn't take a picture because honestly, I didn't want to embarrass him as he is the "SUPER PREPPER" You know who you are......

Now onto a serious issue that has happened over the past couple of days. If you have seen what is going on in Charlotte I find it tragic. See, 9 years ago, we never had this happening in this country. I wonder who has caused all this? I think you know and his last name begin with a "O" and that is my opinion. If you want to challenge it, please do. Honestly, I am so sick of this narrative that has been projected by the liberal ideology and the stupidity of the black community who continue to vote for their own enslavement under liberal policies. See but please have your facts straight. Every 4 years, the liberals come out and promise all this shit, well, you know what happens next, Yes, absolutely not a damn thing.
I remember back to a day I was standing the 2000-2400 watch on Delta pier in Mayport and someone had wrote on the wall or the guard shack in boredom, and I quote " Why is it that when we are overseas we are American's but at home we are White, Black, Hispanic, and Asian". Think about that for a second. Why is that? Who has caused all this is it the media, YES!!!, Politicians, YES!!!!, Race baiters like Al Sharpton and Jesse Jackson , Yes!!!!!, Social Media, oh HELL YES!!!!! Blogger is the only social media I am on, and it is only to get my views out and to let people who know me what I am doing, and that is only to the extent that I want you to know based on sensitivity of what I am doing and how time-late I want to publish it. I only let my close friends know exactly what I am doing.
So everyone, what are your thoughts on this chaos in Charlotte. Please, be honest. I know you all are tired of this crap just like I am whether its in Charlotte or another city.

P.S. To the Panhandle fuck who thinks 4x4 FJ Cruiser's are too pretty to drive through creeks. The only pretty thing that is driving our FJ is my wife, and by the way, it's two wheel drive so why would she drive it through a creek? Damn, assumptions are a mother-fucker right?

Just wanted to drop a quick post to say we are doing better. We still have our days but we are doing our best to get back into the normal routines. The boys wanted to play football this fall so they have signed up and we are consumed with their separate practices. Baseball was easier on our schedule as they were on the same team, but since they are 13 months apart, football requires them to be in different age groups.

Fall garden is in. We didn't do much this fall except for a few items and have gotten our first batch Collard greens and filling up 3 gallon size freezer bags. 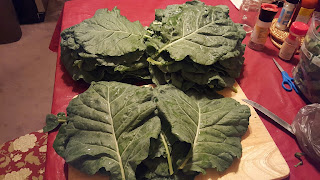 We also have fall green beans which have bloomed and starting to make beans. We did real well last year with them and still have a few packs in the freezer too. Broccoli and Cabbage are still to small but they are in. Our fall Tomatoes did not do as well as the spring plants as 5 of the 8 plants have died off, seemed as they were growing inside out, baffling to me. We have blooms on the survivors but not Tomatoes yet.

Sunday night, temps were close to 70 degrees so we all decided to sit outside with a fire. It's been almost 6 months since we had done that and it did us all good. It's nice to sit outside at night with the tranquility of a fire and just talk with the family. No TV, No Radio, just us. It is so relaxing. 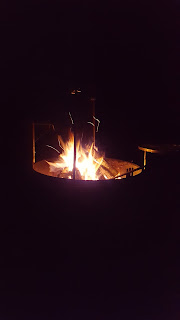 I was planning on doing an update on the "Fouled XJ" with ordering either bumpers or a roof cargo rack; however I had a bit of a technical problem. ND had spun me up at the beginning of the month  and I sat down to pay some bills online. Each month I add more principle to our mortgage payment, so as I lost track of which line I was at on the page and clicked submit, I ended up making a lot more than my normal payment. Let's just say I made an extra house payment. Yep, I did it and was not happy, but when I sit back and reflect, I guess it is a good thing as I want to pay my new house off early. I wont make the same mistake next month.


I decided to change up the layout of my blog to make it easier to read. If it is better, let me know and I will keep it.