Just wanted to chime in and let all my followers know I am still vertical and breathing. Matter of fact, was texting with Stephen a few minutes ago about local private gun sale prices, it is hilarious.

If you follow my better-half's blog, JUGM let out the news of our loss of one of my best friends and quasi family members. We met around 7 yrs ago and hit it off from the start and if I had a little brother, which is an understatement, he was 6'7, 320 lbs, and also my nemesis in college football, he was a Georgia Bulldog, and I'm a South Carolina Gamecock fan, what do brother's do, they fight, and college football was our median.

Saturday morning, I slept in late only to wake-up, turn my cell phone on and get the news of his passing a little over a hour before I awoke. I grabbed a cup of joe, got dressed in a hurry and rushed over to the other side of the community. When I got there, Hospice was there along with the funeral home and I wanted to rush in a see him, but was told they were getting him on the stretcher. As I and other close friends gathered outside, two of them are Rn's and rushed over to perform CPR with no success earlier, he was wheeled out, I lost it. I had my dark Oakley Shades on, but tears were flowing with gravity. As everyone said their last words, I was the last one, and I couldn't do it. I just stared and raised my hand to the funeral parlor attendants and motioned that I am at peace. WHY!!!!!! I lost one navy friend to suicide, then my father in April, now this, WHY!!!! I really don't understand why good people are taken from us....

We will be having a celebration for him a week from Saturday, and in his fashion, we are not to wear suits, ties, collared shirts. His style was Beach style, shorts, t-shirts, and flip-flops. I may even throw a Bulldogs Shirt on for him!!!

Now, if you read my blog posting title, let's get one thing straight. I am married, have two kids, two boxers, and a truck I love, and the comment of "I Love Governor Nikki Haley" was meant to say she is a great business-minded Governor that cares about getting jobs and economic development of her state, hopefully some of that money will go to I-95 improvements. Saw this on the local news tonight and thought I would share, maybe because I like guns too and she was wearing heels while shooting.

**Warning**, for all viewers who do not like screeching guitars and hard rock music, please turn down your hearing aids, go knit a sweater, or turn the volume down and listen to Lawrence Welk and try to capture the adrenaline I feel from this video.

As I am a proud semi-retired member of the United States Navy, semi-retired means I will always be a Senior Chief, just now that I have a civilian assignment at COMNAVHOMELANT!!!!!

I have always been proud of serving with, in my honest opinion, the finest branch the United States military has to offer, based off our capabilities and where we can be, I am sure Duke and Stephen will also agree.

The flight deck crew orchestrating a "Symphony of Destruction" in the organized chaos.

A/C launching of the Bird Farm (if you haven't launched before, I'm sorry, What a rush! HELL YEAH!)

RIVRON boats crashing back prior to unleashing HELL on someone or something. ( I have nightmares from them)

505 feet of American fighting steel, flying the battle ensign in a hard left rudder at flank

and the nations finest and bravest warriors, our SEALS. You guys are amazing!!!

I wonder if she is still working at this T.V. Station?

http://www.youtube.com/watch?client=mv-google&gl=US&hl=en&rl=yes&feature=related&v=vm5JGX2or-s&nomobile=1
Posted by SENIOR at 11:25 AM 6 comments:

We arrived back home today from God's Country, and dealing with the SORRY-ASS drivers on I95, I felt that I needed to strangle someone. I can not beleive how bad drivers are, quick, speed up to 70, then slam on brakes, it felt like a electrical hertz cycle. We did managed to see a nice cloud of smoke over a hill top and witness two cars go off in the rain drenched median with one getting stuck. Well it was a shame that I didn't have my work toolbox with me or I could have pulled the lady from Maine out, hold on, wait a minute, you were one of the crazy drivers I saw today acting like a total moron!!!

Need to change the subject, BP getting too high, I would like to welcome a new follower, Constitution Coalition to Senior's Mess. Knock on the door, wait for the old crusty Senior Chief to yell "Enter", and grab the CMC's unwashed coffee cup off the rack and let's talk some scuttlebutt.

I purchased this month's "The Backwoodsman" magazine. I had viewed it several times in the store as JUGM has been shopping and last week, I said "what the hell" I bought it and toook it home for further review. I like this magazine, has some good stuff in there. I am always looking for ways to improving my skills and supplies, so I stumble across this: 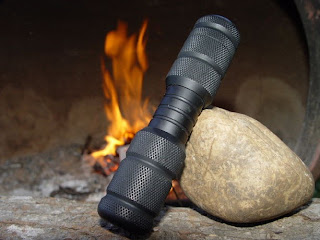 This device is called a TeraLight Fire starting device. It works off the same principle as a diesel engine, compress air and fuel and the fuel will ignite. I went to their site, read and viewed the video of it's operation and thought, this would be a cool addition and add redundancy to fire starting capabilities. Well during our R&R trip to Casa-Del-Rock, I tried it out. This device is made very well, CNC work is excellent. It's lightweight and simple to use. 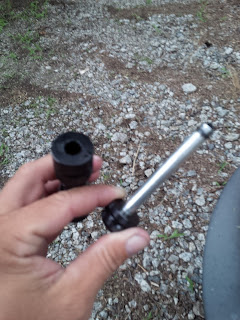 Put some tinder or char-cloth in the cup at the end of the rod and insert into the body, compress with one firm stroke and the char-cloth ignites. Once I did this, I blew on the ember and used my knife to remove from the cup and dropped in a tinder bundle. 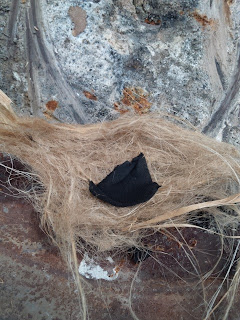 Once in the bundle with additional char-cloth, just blew a gentle breath on it as with any other tinder bundle and it starts right up. 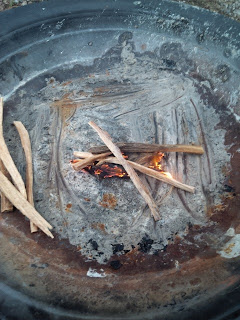 My dad was always prepared for anything, and I learned many things from him when Hurricaine Hugo went through his area. It also helped he had a 39 gallon trash can half full of Kindlin or Fat-Lighter, however you refer it as. With small stuff also cut, this was the result. 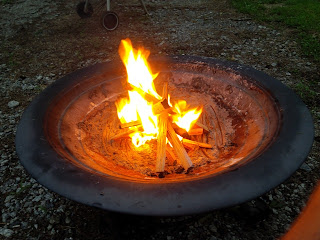 Here is a link to their site if you desire to review it and see their video
http://www.tera-light.com/
Well JUGM, the kids and I spent a few days at Casa-Del-Rock and enjoyed some much needed down-time. It was a nice relaxing time, but of course it would have been better if my Dad was there. I even mentioned to JUGM that my dad would have been laughing at me about how NW and ND were acting. One thing I love about this area, it's very rural.
Many times, you don't pay for things, you barter. Our family friend was looking to help another friend out with finding white flint rocks for making a rock fence to keep people from driving on her grass. Well Casa-Del-Rock is a gold mine for these rocks and a good sign of gold in the area too, there is a Gold mine that was closed years ago, but reopended last year, only 3 miles away.
So he mentioned about making a tire swing for the boys so this was an offer I couldn't turn down. So our family friend and another friend showed up in beat-up chevy pick-up with rope and a tire, ready to go. This swing kept the kids occupied with so much fun for the whole time we were there, they didn't care if it was soaked from the rain.  ﻿
Saturday was dedicated to doiing much of nothing and some bow shooting. I worked with NW and ND for a few hours and JUGM and I broke ours out. NW did real well, NW struggled since he is a lefty using a righty bow and his intrested in shooting a bow is not quite there. As I cooked potatoes on the grill, I knew I had some time so I went shooting alone and shot at ranges from 20-40 yards. I did my best at 30 yards. After I finished, NW wanted to shoot some more, so here he is with his birthday present. I know its not a perfect bulls-eye, but to a 8 yr old wanted to impress his dad, I added to the approval.
Senior﻿
﻿
﻿
﻿
﻿
Posted by SENIOR at 8:51 PM 8 comments:

The family and I have took some R&R for the holiday weekend at Rocky Top. Have much to do  such as shooting, some archery, romping though the woods, and sitting in swings with some ice tea. may even plow the garden again. I would post some picture but somehow, blackberry is not to friendly with Google Blogger. I will see if JUGM can post some. Everyone gave a safe weekend.