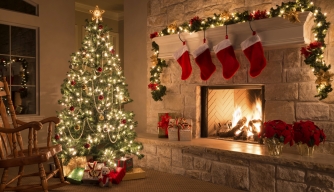 We wish you all a very Merry Christmas!!!!!


The day of our road trip the weather was just short of awful. Hot, mid-eighties at dawn with humidity so thick it was like walking into a water fall; our shirts and pants dripped water. I mention this because our weather today is rather pleasant, a welcome change indeed. With this hurricane side-slipping its way up our coast, for reasons I do not understand, our humidity levels have dropped well within the comfort range. Back to the regularly schedule program.

As I said yesterday, after the dig we drove to a crossroads town and had breakfast at a small cafe where they served us bad muddy coffee but excellent grits, eggs, and bacon. From there we took another long drive to our retreat and placed the buckets on our tailgates and popped the tops.
Each man designed and stocked his bucket to his needs, so you will find each a bit different and perhaps you'll find ideas and items to consider for yours if this task is undertaken. Please see part one before reading this post, it is listed on my sidebar. Thanks.

Below is the next item taken from my bucket, seems to be tobacco and matches. 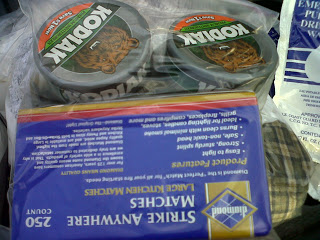 Emergency food bar, has a lemon flavor and used by our Coast Guard. 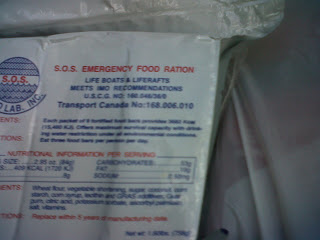 Here we have a hand powered flash light, which worked quite well, and a pipe and its accessories. 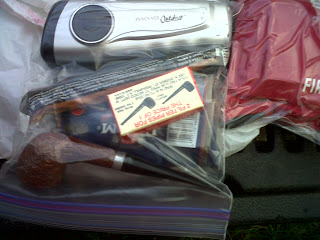 In the picture above also note the red item to the right of the pipe, a first aid kit. 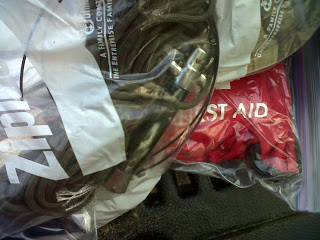 Above, paracord and knife. The knife I smuggled across the Mexican border circa 1971. 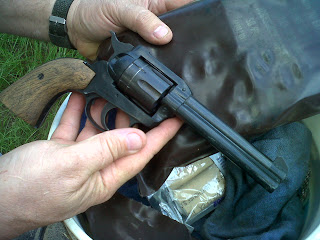 Let's move on to Duke's bucket....here's his bucket firearm, a .39 revolver. Again, it came out of the bucket in fine shape. 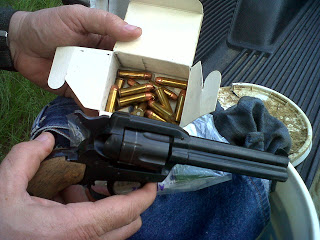 Duke with his ammunition. Please note he has twelve rounds. Remember how many I placed in my bucket? Two hundred, very good. Give him credit, .38 packs a punch, but I'd rather have those 200 rounds in an emergency. Zombies require head shots. 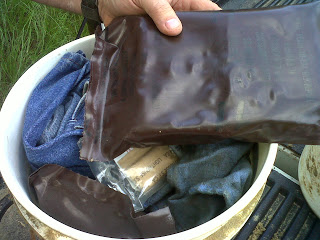 An MRE package from Duke's bucket, beneath, clothing articles.
Here is a shot I forgot to add from my bucket...from left to right, bug repellent, a small fishing kit, and a bag of medical supplies. The yellow item is three emergency candles. 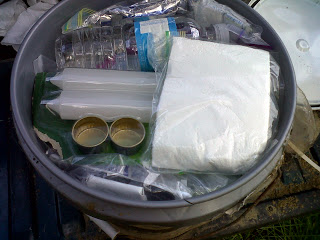 This is ShooterSteve's bucket just before he removed its contents...again with candles, water (notice its crystal clear) toilet paper (you reckon its placement was well thought out). 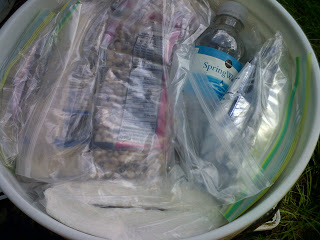 Above, I believe this is ShooterSteve's son Austin's bucket. Austin, since his father is a counsel member has full membership status (other than a vote) and has become a valued member of our group. I've adopted him as my grandson and am extremely proud of the young man. He can place shot groups on targets the size of a quarter at 200 yards...picture me with a big grin on my face. 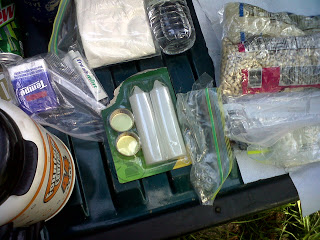 Above, this is ShooterSteve's items presented on his tailgate...notice the packages of dried beans and rice. 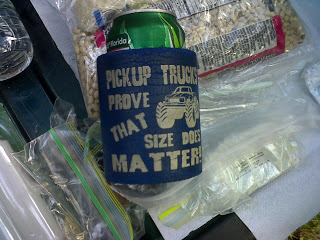 ShooterSteve asked me to show you his can foam thing....he has size issues. Just saying.... 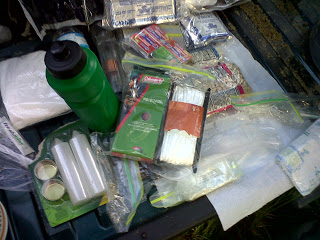 
Many years ago our group in Florida did a project that lasted 3 years, but could have lasted longer but we collectively as a group decided to dig them up and see how they fared. Our goal was to bury supplies in the event that maybe one day we may need to utilize them as we are getting out of town. I have seen many blogs and websites promoting items such as the MTM Survivor Burial Vault that runs close to $20 or buying large diameter PVC with caps and fitting costing well more that $20. I have continued to place buckets in the ground here in SC and from what I have learned during my time in Florida, there really is no reason why I need to go dig up buckets to do a post when I have participated in the past. Stephen originally posted the 3 part series over at his blog, "Standing Outside Looking In" and after speaking with him he gave his blessing to re-post. I have never re-posted as I like to write my original work but I think this a good re-post. Enjoy....

We've all read the survival forums, AR15 fiction apocalypse pieces where the our action hero has the foresight to sally forth and prepositions survival supplies in his five gallon bucket. He studies his escape routes, finds just the right bridge, or cattle pasture, perhaps an abandoned farm and digs himself a hole and seals his treasure into mother earth's bosom.

Several years ago my friends and I did the same. It's important to understand, as we're all formal (and at times current) military, we don't talk - we do. I suppose it's necessary for me to give some background information on my group, without giving out too many details risking security.
Ready, here goes....several years ago I had an idea. I asked men I knew on an informal basis if they'd like to join me, as we all seemed to have the same world view, and form a support group. We had all taken the oath. We loved our country, and each of us lived our lives in a current state of preparedness (due to that military training) it seemed the intelligent course of action. We did. We drafted bylaws, formed a voting counsel of the senior members with military backgrounds, and offered auxiliary memberships to others without military training. It worked. 'Nuff said.

Like I said, we do, we don't talk. Our group trains. We preposition those supplies others dream of, we train with firearms monthly (you do not want these men shooting at you, trust me.) We are currently building our retreat, have been for over a year. Which brings me back to those five gallon buckets. Before we'd chosen our retreat we thought it prudent to stash a few supplies along our escape route just in case we were caught flatfooted. A bucket of items which might just come in handy filled with what each member thought important  to facilitate their efforts to reach safety.

Three years ago we did our planning and executed our plan. Early on a predawn morning our trucks formed a caravan and drove far out into the boonies. We had selected our sight based on several variables, the most important being the ground should be undisturbed for at least ten to twenty years. We dug. Marked our grave on paper and set a GPS, and got the hell out of dodge.

Years passed and we decide it's time to unearth our graveyard. It wasn't needed we decided and last month went out to recover our buckets. We just could not abandoned them since a few held handguns and other important and expensive equipment. Again, here we were before dawn's light, fighting our way through three years of brush growth (some pine trees then were only knee high, when we returned, the trees had grown six feet) stumbling and fighting and cussing in a vain attempt to find the proverbial X that marked the spot. We failed. Even with the precautions and pains we had taken to map our exact location, we failed. Our GPS had been taken with a cell phone long since replaced. Our landmarks seemed to have shifted. We gave up and regrouped. Metal detectors were placed on our list. We returned last Saturday. It took about thirty minutes of hard searching but our friend Duke found the grave with his detector....I just about kissed him on the lips, but he's just too damn ugly. Man hugs were freely given.

For those of you out there new to the world of survivalism, take notes. These buckets were placed on high sandy soil. We dug the hole about four foot deep, just deep enough to bury the tops of the buckets about a foot beneath the soil and we placed all six buckets in the same grave. Each was sealed using rubber ringed lids and all items inside had been either vacuum sealed or placed in ziplock bags with as much air removed as possible. Then all items were placed within a heavy trash bag and tied securely. Many of us even went so far as to seal our buckets inside heavy three mil contractor bags, but our test proved this unnecessary, as other buckets came through this test in remarkably good condition. 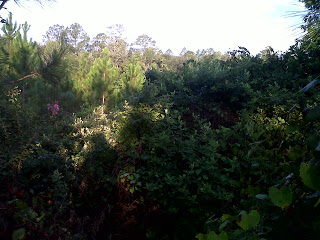 Above, our location. Its dense and located on the boundary of a great swamp. 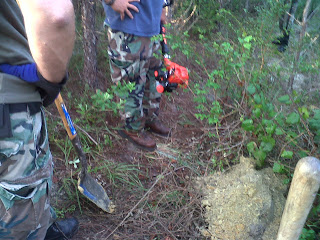 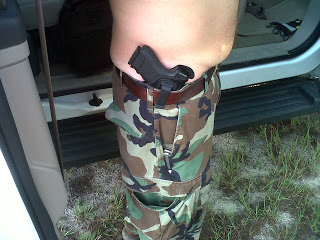 Here's a beauty shot of Senior Chief proving we are ALWAYS ready for action. This next shot is yours truly, taken by Senior. It's as much of me as you'll ever see... 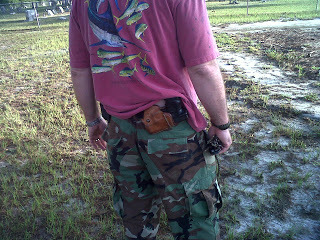 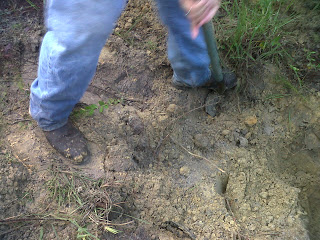 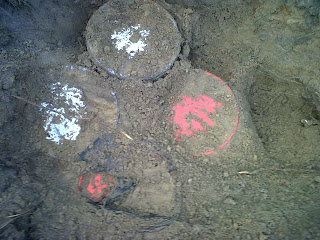 The light of day after three years underground. 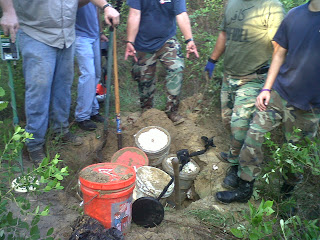 After the dig. Here we find Senior Chief flipping one of his hand signals...don't know, he's 'hip.' 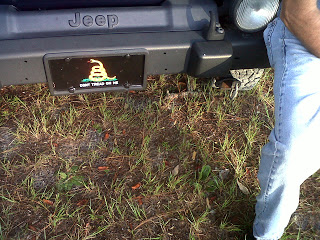 Above, Rebel takes a break on his bumper...notice the flag, we all fly one on our trucks...club membership pride. 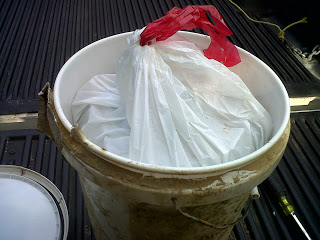 We left the dig site and drove to a small town for breakfast. Even though the anticipation of discovery was killing us we held off opening our buckets until a long drive to our retreat. The picture above is of my bucket just after opening. So far so good. Next, bag open. 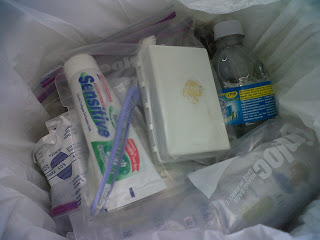 Remarkable. The contents of the bag smelled as fresh as the day it was buried, actually it smelled of pipe tobacco that I had inside. No moisture, so I began to remove items. The following pictures are items as removed in order. 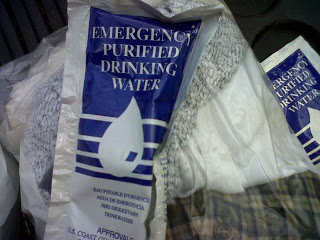 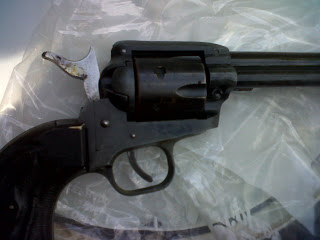 This is an older German made .22 caliber handgun. Nowadays, this pistol is sold under the Heritage brand name. Years ago it was manufactured for Herters. No rust, she was as nice as the day I planted her. 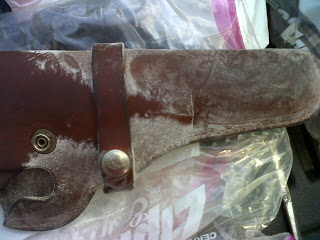 Here is my only damage...mold from the moisture of the leather. Later that evening she cleaned up well using Mink Oil. She's an old Hunter brand holster.

Above, ammunition, two hundred rounds both in the boxes and pill bottle which held one hundred. This is the secret of stashing .22 caliber. Never underestimate the ability and utility of a .22 for survival purposes. As you can see, with smaller calibers you can stock a large amount of protection. Remember, you'll be humping the contents on your back. Think about it.

End of part one. In parts two and (maybe) three we'll continue our exploration of the rest of the buckets and take you to our retreat. Until then.

I hope I'm able on this busy business morning to get around to reading all my friends blogs...hope, hope.