Same ole weekend routine till the end of the month.

As we go into October, the temps are cooling off which I am enjoying. After living in Florida for 28 years, serving the majority of my military career there, getting married and having kids, running a commercial landscaping business for 5 years I have had enough of the heat so I am glad it is cooling off. The next thing I have to deal with is the leaves falling off all my trees. Would be awesome if we have a white Christmas this year but I know I am looking too far ahead.

The kids football is in full swing now, the regular season has started. Both the kids teams are 2-0 with NW playing on the defensive line as a nose guard and ND as a guard. They are both in different age groups but next year they will be on the same team. I keep asking the kids all the time if they like playing so it looks like this will be their fall activity. It sure as hell wont be Soccer. Their seasons will end at the end of the month, barring playoffs.

I have been watching some of the show on NAT-GEO, "Live Free or Die" I find it ok, but I find it ironic that this couple in the mountains of NC have aspiring dreams of being self sufficient on 1 acre of land and now are having to ask other like minded people for use of their property. I do like the guy who lives in the Okefenokee and how he lives his life out there. Neighbor of mine pick up a new addition to his property which has got me thinking into purchasing a couple. JUGM has a friend in Florida she keeps in touch with who raised two of them and had them butchered and filled there freezers up. I have always bought them in the past but I have the space to do it here now so more to follow. 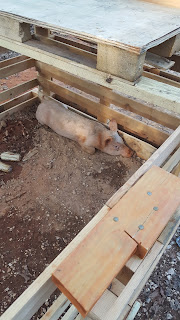 Well we are less than 40 days away from choosing our next President which bothers me. I am not too keen on the choices but I will vote for the lesser of two evils and not sit at home an pout like many in this country will. I sit back and think, how much worse will this country get if Hillary Clinton is our next president? Honestly, I think it will get drastically worse. You know she will go after the Second Amendment and that is no secret with her "Common Sense" gun control. So if you are a class III holder or have purchased items that require a "Tax Stamp", well you are in the cross-hairs first, trust me you are. Many years ago I had thought about obtaining Class III items and even created a gun trust in Florida but why? Why do I want to put myself on the Radar? I have shot automatic weapons in the military and they can get away from you if you don't know what you are doing? Suppressed weapons are good, but where will you ever be able to find 5.56 ammo that makes you completely silent? You sure as hell wont find it at Sportsman Guide, Cheaper than Dirt, or other retail outlets. You can find some .300 blackout ammo in the 220 grain variety and greatly reduced your noise signature, but good luck on the 7.63x39, 7.62x51, and of course the 5.56x39 I mentioned earlier. I have thrown thoughts around of playing with 5.56 ammo on the reloading presses to see what I can come up with. I may dolly around with it in the winter. I do have a range here on the property to do it.

In my last post, it was brought up why Black Lives Matter is not classified as a hate group. That is a DAMN good question. I suppose the Southern Poverty Law Center thinks it is perfectly OK for a group of individuals that focus on race to go out to destroy property, create mayhem, and attack other races of people.  I got one better for you SPLC: CLOWN LIVES MATTER!!!!! 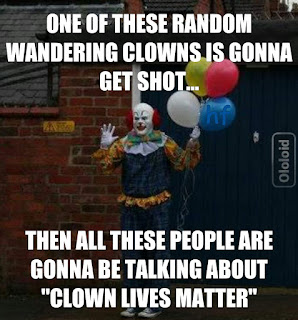