I know its been a few weeks since I did a post but I have been busy as a husband, father, and son-in law supporting JUGM and our boys with long and short term care for her parents in Florida, all along while working, maintaining the property and garden, freezing, canning, and pickling garden items.

"Papa" can be hoisted at anytime now. 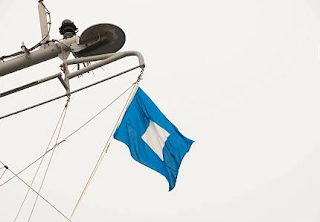 Keep JUGM's parents in your thoughts and prayers. 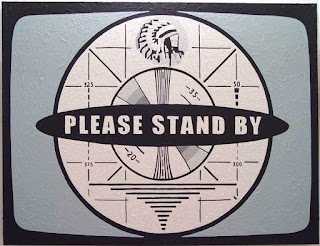 Took some time off and sent a fellow Chief and brother ashore for the final time, to a more permanent command.

I may have mentioned this earlier in February, I was asked by one of my junior sailors from years ago to be the "key-note" speaker at his retirement ceremony. Of course it was great honor to be asked so I said, "Hell Yeah" I wouldn't miss this for anything. So as the months went by, I would have a moment to myself and think about what I was going to talk about at his ceremony. I didn't write anything down of course, so I had a deadline. I had until 1000 on the 30th of June to be ready or I would be a flop. Well in two days, I had my fellow Chief freaked out when I texted him and said I was done and the speech and it was 7 pages long. What he didn't know was the speech was double spaced as it would be easier for me to read. I let him off the hook in my opening comments.

On the 29th, we head south. I took Rope-Yarn from work and got back to the house and loaded up my trailer and we were on our way. I also had some other work to do in Florida at my In-laws house and also with my house too as my past renters are out. The day arrives, June 30th and I am up at 0700. After a visit to the rain-locker, teeth brushed, suit on I had my first cup of Coffee while making on final pen review of the speech. We all load up and headed on our way. It has been a few years since I have done any public speaking, but like they say, it's just like riding a bike.  It has also been 7 years since I was on base, my god things have changed.

Once there, I met up with one of my civilian contractors that worked for me in my final tour and we chatted for a bit before I had to go in. Since my retirement in 2009, there are many new faces on the base so at first I didn't recognize anyone. The NCC was there and she quickly figured out I was the guest speaker. The Commodore and I introduced ourselves to each other and had a side bar for about 15 minutes. Seems one of his mentors and friends used to be my CO on my first ship and is now retired. The Commodore was also the CO of my second ship, well after I was gone. Things only got better when some of my brothers came in, only to be wearing one more star than me. There are some times I wish I had stayed in, I do miss it a lot, but we all choose our road at the intersection and go in an alternate direction, that's life. I have done it many of times.

Ceremony kicks off, Warrant says the invocation, the Commodore speaks for about 5 minutes. I take the stage and damn did I nail that speech or what. I talked for about 10 minutes and had the crowd going. Then they presented all the Awards, presented the shadow box.

Next was the reading of "Old Glory", relieving the watch, speech from the retiree, the benediction, and we were done. Next stop was the bathroom to change out of my suit into something more comfortable for the damn heat and humidity of Florida. Once done, we proceeded to the reception over to the..... 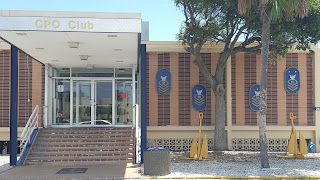 So as we all said our goodbyes, the family and I headed back to our house in Florida while making a fly-by of the piers so the kids could see a few of the ships. 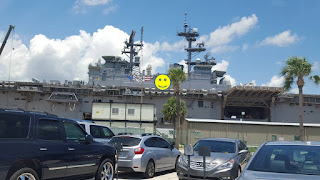 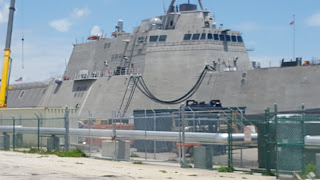 Once we got back, I got my open trailer and headed out to buy stuff we needed for the next day. Friday rolls around and NW and I are out in the heat replacing the screen door on my FIL's back porch. I do not miss the heat and humidity of Florida. Then after our visit with them, we heading to the house to start replacing the double gate on the fence to the back yard. Yes, back out in the heat for all of us. Once done, we pretty much sat inside and watched T.V the rest of the day.

We headed home Saturday and of course to our expectation, so much crap to pick in the garden. Let's just say after that, we vegged in the house. Sunday was a fun day, NW turned 11 years old and I think JUGM will do a post on it. We did manage to stop by Cabelas so NW could spend some of his money for a new sling for the .22 rifle he got for his birthday.
Happened to see one of those minions from my former group here in SC in the store walking around with what looked like family. I know he and his wife saw me as I was standing in full view with my family between the ammo section and gun section in the back of the store. He made the right choice and steered clear of me and my family and that sir was a wise decision, BZ!!!! Well that's about it for now. The Chief results should be out in a few weeks so I think my next post will be geared toward the new chief's that will be going through ugh....... well it's not called Chief Initiation anymore, think its call Induction?
Posted by SENIOR at 7:12 PM 7 comments: