Moving in, Sun Tzu is poetic gibberish, Baseball starting for the boys, and getting the garden ready for the spring

As we continue to finish our move, I realize that I do not want to move anymore. As you get older, your body starts to feel every box, Fridge, Couch, etc, etc, etc. At the present moment, I don't plan to move anymore. I took 2 days off from work, and those two days included 3 more with the Presidents Day weekend, so it added up to 5 total which helped me save some days for the future. It is amazing that you live without most of your stuff for 18 months and you think, "Why don't I throw all this stuff away or donate it", but as you all know and have experienced in the past, you sooner or later will need that stuff. So what do you do? I know, I am throwing my hands in the air too.....

During our unpacking, we come across our numerous boxes of books and uncover this one. 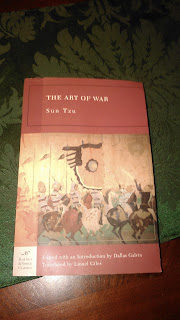 Now, I was told by a former fellow group member here in SC, and I EXPRESS FORMER, the kind of guy who thinks he is a "Survival Expert" one who cant even tie knots or understand that you have to put wax on your bow string" that his writings are "Poetic Gibberish". Really, are you serious? Now I know that this book has been required reading for both the Naval Academy and Westpoint in the past, and I am sure it is still is, including operators in the Special warfare community but it is gibberish. You know, this is what happens when arm-chair "Survival-experts" who think by reading fiction survival magazines and daydreaming of being a soldier/sailor/marine/airman wake up to reality and find out that you are not a soldier/sailor/marine or airman and just a lonely minion in the real world. I dealt with something similar in Florida early back in 2000 learning survivalism and prepping with Stephen. There was a former group member who was a  marine and who served as a disbursing clerk, only serving one tour at a embassy thinking he had fought in Infantry. We both found that out who he was when he was shooting flare's into the night and bouncing off the ground as he went prone. You had to be there, trust me on this one.

As I continue, it is that time of the year again when the "Boys of Summer" start practicing and getting ready for opening day. Yes, the boys have started and we had practice Saturday and Sunday. The kids having been practicing during the winter and I personally think they have a leg up on the other players. Both boys are starting their second year in their league and they are both considered veterans as the played in the same division last year. First practice went well with fielding and both tried out as a pitcher, and I have to report they did pretty good on their first look. NW looked like he didn't miss anything during the off season as catcher, except now he has an adult-sized catcher's glove. He took all his Christmas money and put it all toward it. Today they did some fielding, but as we had to leave early because JUGM's uncle came over for dinner, they went on to batting practice. OMG, NW was smacking the crap out of the ball, at 10 yrs old he was hitting the ball over half-way in the air to the outfield. ND being a lefty actually listened to me in the off season and was hitting the ball to third base side, giving him more time to get to first making it a longer and harder throw for the 3rd baseman and shortstop to get him out. If you could see me, I had a big smile on my face today, very proud of them.

Saturday, I started getting the garden going for the spring garden. We recently did a big clean-out of the chicken coops and moved all the "Poo" down to the garden. 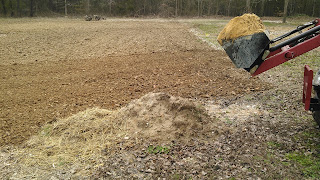 With chicken "Poo" being so potent, I plan to dilute it with some sand. As you can see the disc harrow off in the distance the garden has bee broken up. Today, I hooked the 5' tiller up to the tractor and started tilling one side of the garden up. Current plan is to put yellow onions and cabbage out by March 1st. 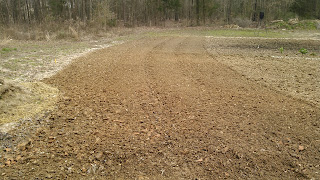 Then I took the cultivator and configured it with plows to make some rows. The 1948 IH Farm-all Cub is currently CAT 3 Casrep'd with a fuel bowl leak and just haven't had the time to fix her to properly make some nice looking rows. 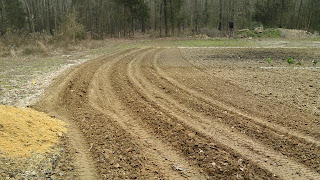 It's after 2300 and I need to go. The morning arrives early. Stay safe everyone and if you ever dream of having your own retreat, grow some balls and put your foot down with your wife and sell you house and move. Pretty easy for most men.......

We are in the new house. Still waiting on our modern conveniences to be hooked up and still have a bunch of boxes waiting 18 months to be unpacked, more to follow. 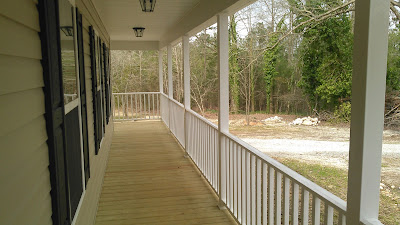