New follower and review of a past training experience

I would like to welcome a new follower, Longtime Wife has decided to follow me and I thank you for clicking the follow button, welcome aboard!!! I have added her blog in the hyperlink contained in her name, go over and say hi.

Since I have been real busy over the past few months, I almost forgot that JUGM got me a very cool fathers day gift. She found a tactical training course just north of Charlotte called Wolf-Fire Firearms Instruction and thought it would be cool for me to go have some fun. I took the drive up there on a Friday night for the weekend. 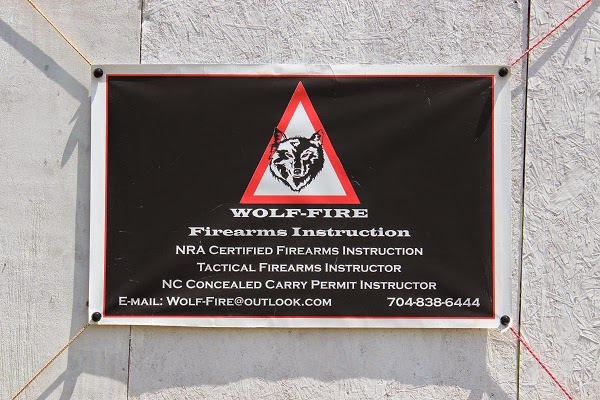 Rain was in the forecast so we all set-up camp under the tin-roofed barn. Of course I had my hammock set-up and I got a great night of sleep. 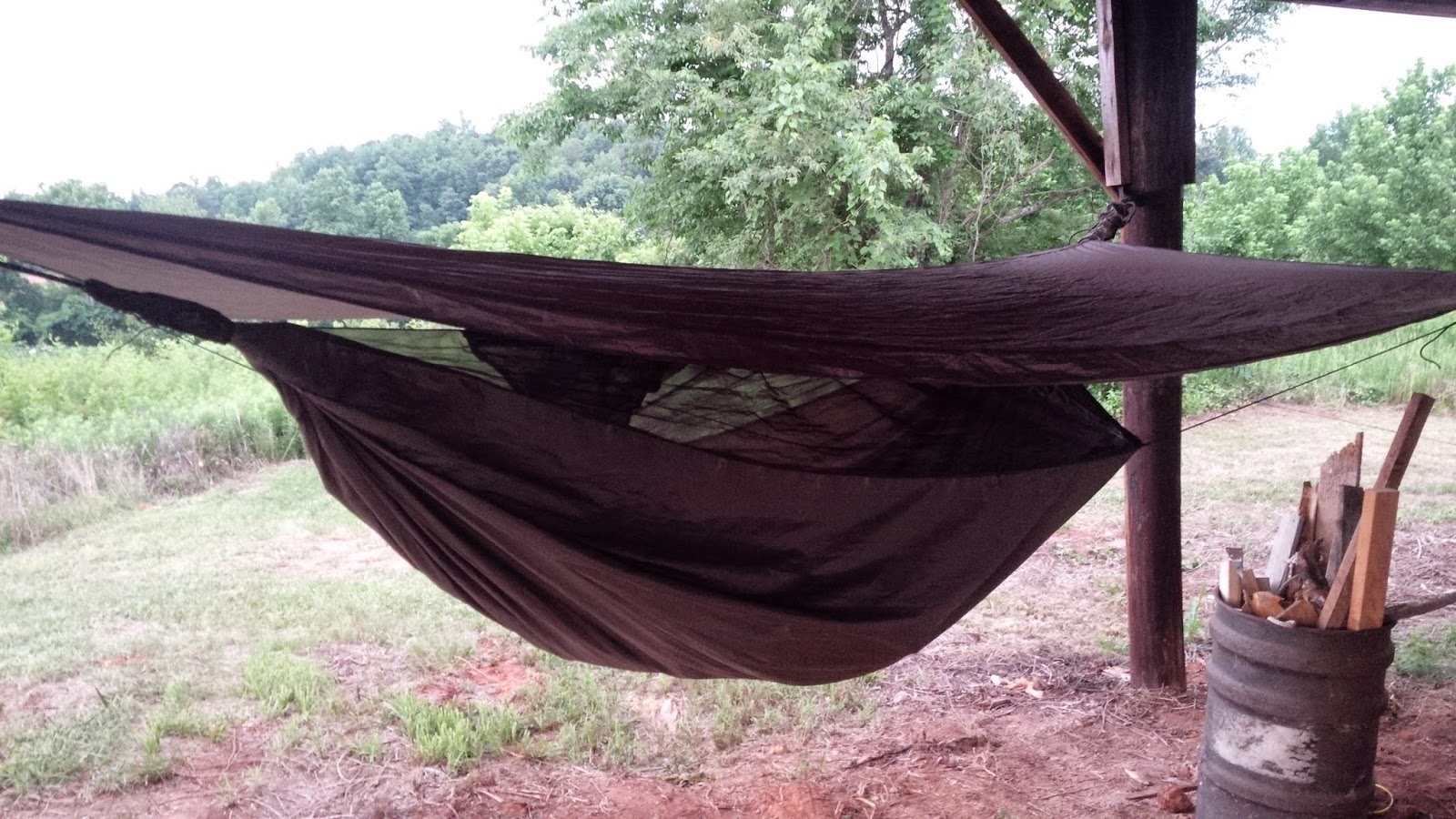 During the night, there was some very in-depth discussions on our current state of affairs ranging from the economy to self-defense and where we think things are going and who and what we are all about.  I think the last time I checked my citizen eco-drive, it was after 0200 and the snoring commenced, not just mine.

Daylight arrived and it got hot very quick. After breakfast, training began with a safety brief. The instructor, David is real big on safety, and I commend him for that. It doesn't matter who you are and your level of proficiency, you can never have enough safety.

First session of the day was designed for tactical pistol. This was not standing in front of a target and shooting, this was elevating your heart rate and moving behind cover, running all-out and engaging targets, and point shooting. I was very pleased with how I and the others did, I heard for many years in the Navy, train like you fight and fight like you train. If you encounter a real-life situation, is you heart rate going to be 60-70 beats a second? Oh hell no!!! You will be above 120 beats a second so why not learn to shoot with an elevated heart rate and adrenaline in your veins? Make sense to me.

Second session of the day was tactical rifle skills. You think I did running in the first session, think again. My team mate in the drills, John from a neighboring county here in SC, and who has attended several courses here suggested we do "Burpies". Now, I had no idea of what a burpy was, but later learned that John is really big into cross-fit and after the explanation, it was similar to 8-count body builders I did in the Navy. Now try doing those damn things after already running, with a tactical vest on, then running 50 yards before firing your first round. Thank god I didn't have my plates in. The instructor had one of his friends come out and do some camera work and I am happy to say, I have pictures and I can still run very fast. That session lasted I think maybe 3 hours, could have been more or less since I was dehydrated, tired, and lost all conception of time. Here are some of the pics. 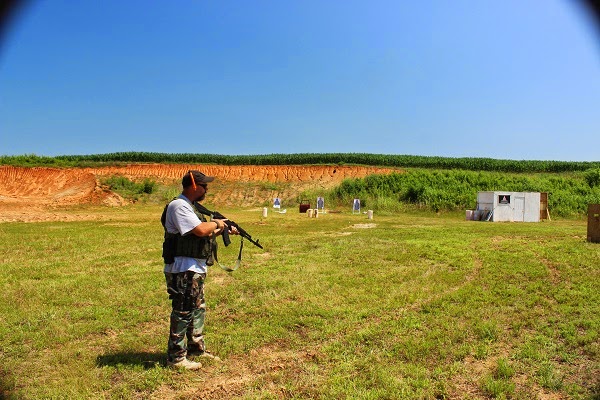 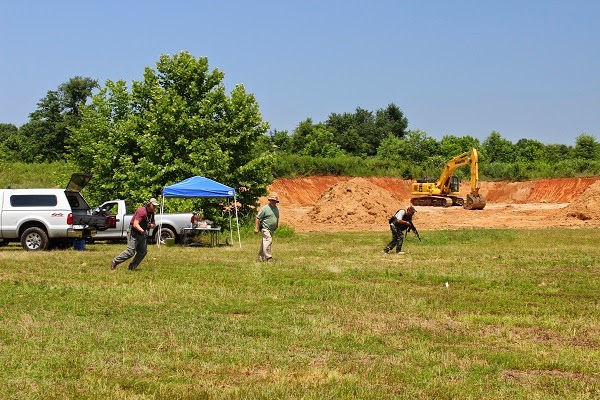 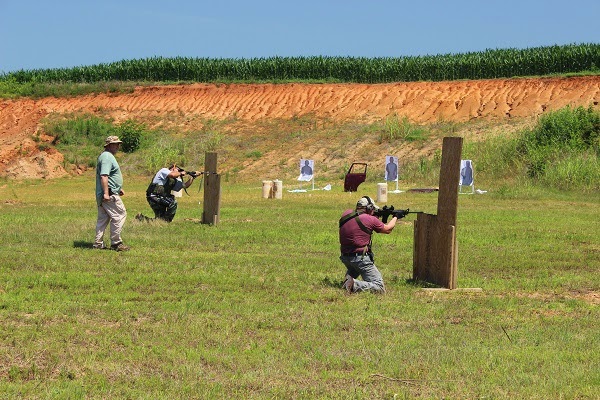 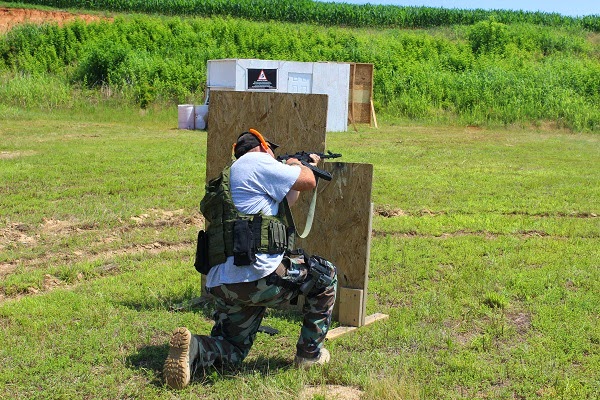 Notice the angle of shooting to reduce exposure when shooting 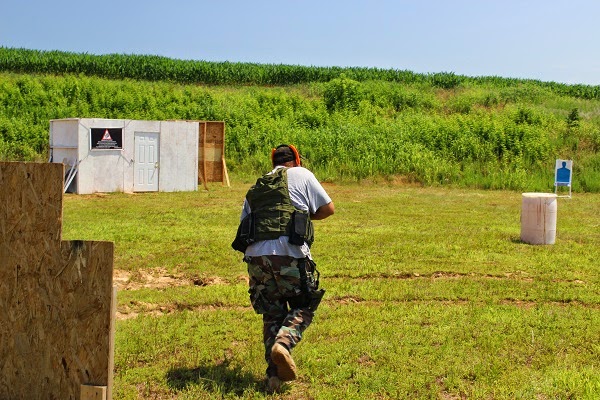 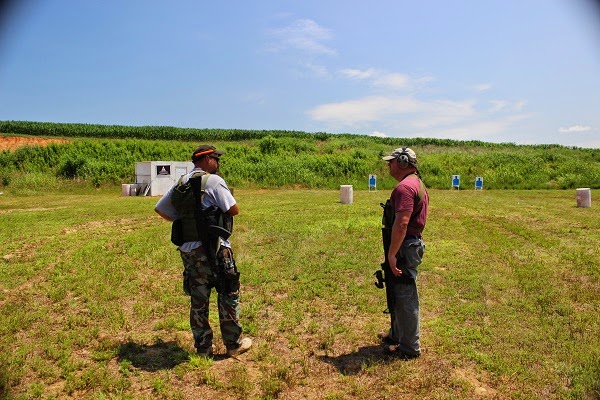 John and I discussing one run.

After the day was done, would I recommend this course or a course similar to this, HELL YES!!!
I learned a lot during this course. First, evaluate what you carry equipment is. If SHTF happens during the summer, there will be many people out there that will find out the hard way, that's kind-of why I wanted to do this in an extreme environment, to test myself. You will also learn what equipment set-up is good for you. I wish I had brought an AR or my AR pistol because shooting 500 rounds through an AK beat the crap out of my collar bone, and had a few magazine issues with mine. After closer review, it was the 2 TAPCO magazines I was carrying.

Second, accept criticism from the instructor. David on several occasions told me to try a different way to handle the weapon to improve accuracy and sight alignment for speed shooting and by-god it worked. The pistol session was not as bad as the AK took on my collar bone, but it was a good pain.

Finally, if you train during the hot and humid summer months, take a lot of water and gatorade with you, holy cow it was hot. I intend to continue with training and will return when it cools off some.

Decisions, they are very tough and painful.

I know many of you have noticed that I have been absent for quite some time. As I sit here this morning, this time away has given me ample of enough time to make many tough decisions and to breath easy and relax some, and I will state again, RELAX some. I haven't had a real vacation in 28 years and the past week and half has been great. Now, getting back on topic, we all are encompassed by many factors in life that affect our decisions for ourselves, our family, our finances, and our happiness. Since I graduated from college last September, I have been searching for new employment. Yes, I was in the commercial lawn management/landscaping in Florida and at the age of 43, it is taking its toll on me, mentally and of course physically. Go spend 6-8 hours in temperatures in excess of 90 degrees with heat index's well over 100 everyday for over 6 months at my age. If you can do it, well by God let me know and you can buy all my commercial equipment and go get heat stroke. My goal of having this business was to sustain me with a very comfortable lifestyle through school, giving me the flexibility to manage my business and learn as I went through school to obtain my business degree, and time with my boys. It was also good to have my own business as most of you know, the health of my father took a turn real quick and was able to spend time with him up to his death. Well yesterday, I accepted a position in Charlotte, NC and will start in two weeks.
Most of and some of you know that JUGM has been in SC for the summer with the boys, well now we can become a family again. This decision has not been very easy. JUGM's parents are not in the best of health, and I feel that I will be a crutch for her, her sister, and unfortunately, her brother as both of my parents are gone and they have someone to lean on and help with estate and probate issues. We talk every night about her parents, and I hear her pain in every breath. With that being said, I have an underwater house in Florida, thanks to the US government approving and giving houses to people who couldn't afford them or a house with property in SC that is paid for. So, the house will be rented out until I can sell and break even. Property taxes in FL, in excess of $1600 per year, and going up. Property tax in SC is $253 for the first year and after one year, I file my exemption as a disabled veteran and it drops to $10, yes $10 a year. Gas, roughly .30 cents cheaper per gallon here in SC, food prices are cheaper, utilities are 1/2 to 2/3 cheaper, and saving the best for last, my auto insurance will drop from $212 a month to $95 and some change, that's a $1404 a year savings.
Living in FL for the past 28 years has giving me a humbled opportunity to meet some great friends and that is what is stinging the most with this move. Yes, I have friends up here in SC, most I have known since I was running around this hill-top in Pampers with theml, but over the years we have maintained good relationships, even with me leaving for some many years. This community here is a very close knit group, we all know each other and have for a very long time and we all support each other. Not saying that I didn't have support in FL, I did and will always be a friend to my fellow group members there. Hell, now there is another place to relocate too if it hits the fan.
So, I hope this blog post shows that I am still alive, JUGM did not wax me and collect insurance money. I have had a lot of interviews here in SC and NC and it has finally paid off. I still am scratching my head why no business in FL that had open positions did not want to take a chance with a disabled veteran who is a college honor graduate? Oh, by the way, USA JOBS is a FUCKING JOKE!!!!!! Sorry for my french but the VA will continue to be screwed up until they let veterans in there to fix it, so stop with the diversity bullshit!!!!! In closing, I look back at this whole process, it took awhile but persistence does finally pay off.